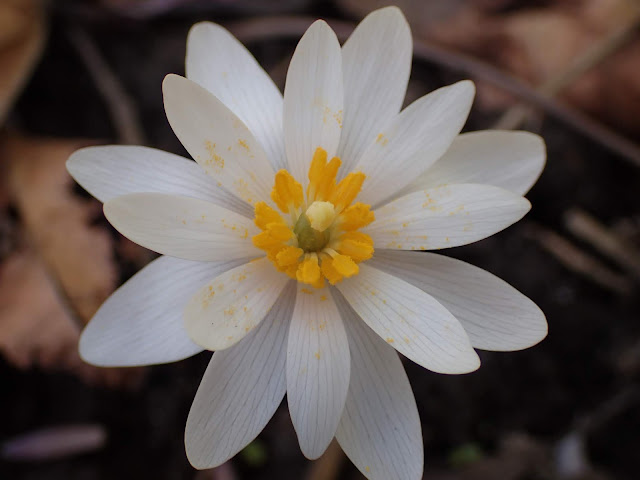 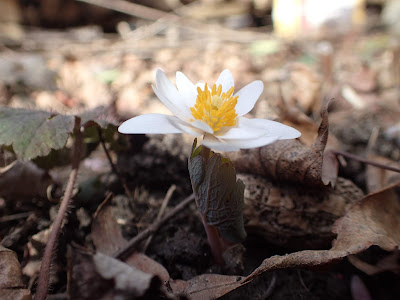 Bloodroot, Sanguinaria canadensis, came up in the front garden again. I'm particularly proud of this patch because they're entirely grown from seeds I bought online. I believe it was Prairie Moon Nursery. They took two years to germinate. I dam near weeded out the very tiny first year leaves which are about the size of a quarter and barely an inch off the ground. The following year though they started making full sized plants and even had flowers!

The late winter days when they flower are often met with seasonal winds that topple other flowers that might be blooming. We have crocuses in our lawn for example and the wins flattened the flowering stems to several patches thus the flowers were destroyed. With Bloodroot though the first leaf forms gripping hold of the flower stem for added support, making wind damage less likely to happen. Eventually the flower fades and a seed pod forms which becomes heavy and falls out of the way for the leaf to take center stage. The seed pod lays on the ground or pretty close to it by the time the seeds are mature. Elaiosome on the seeds entices ants to carry them off and start new colonies of bloodroot elsewhere. 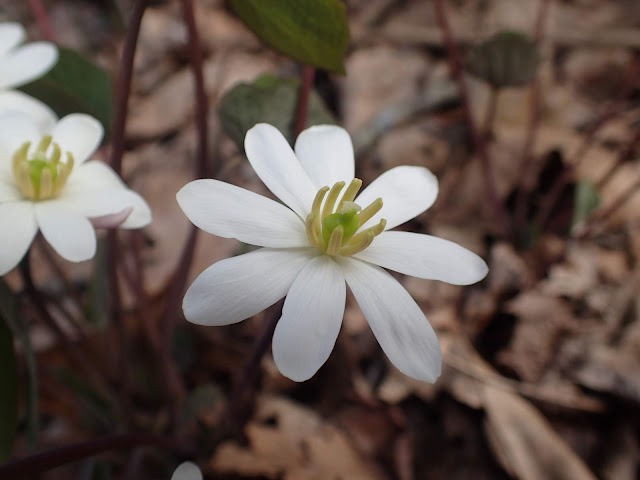 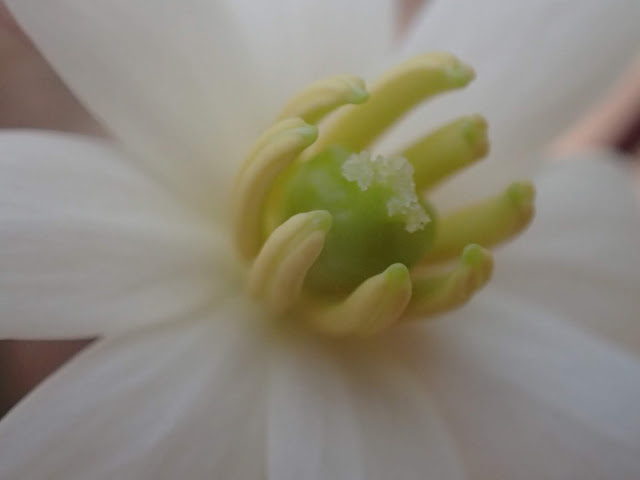 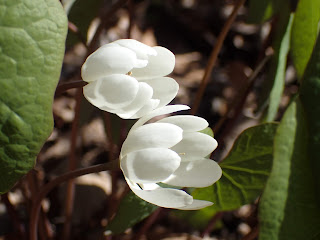 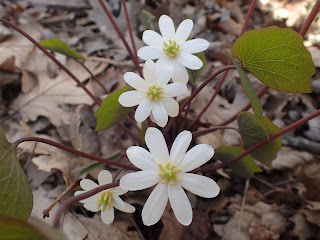 Twinleaf, Jeffersonia diphylla, is another late winter/early spring bloomer. However it seems to embrace the fact that it's flowering at a horrible time of year. Blooms last anywhere from 8 hours to 4 good day and often the petals fall off simply by touching it.

By good days I mean it's warm enough for them to have opened. On bad days they have enough sense to close up so those days don't seem to count with their internal counter.

The name Twinleaf comes from their leaf formation which look like a set of elephant ears.

Later on the flowers turn into acorn-shaped structures that are supposed to spill open but more commonly break open and allow ants access before they get to that point. I often see ants going in and removing the elaiosome packets from the seeds without ever moving them. 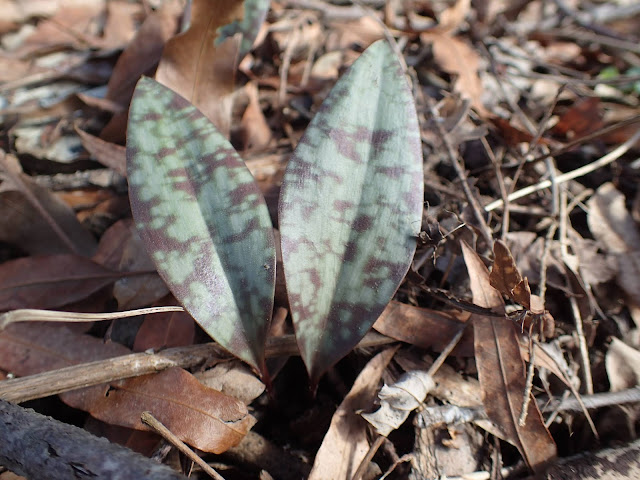 Trout Lily. It's been so long that I put these in the ground I forget if the yellow or the white one. Regardless, these mostly form colonies of plants that produce single leaves sticking up all over the place. I'm told individuals that have two leaves coming out of the same hole "might" flower which would be nice. After a decade of growing these it would be good to finally see one bloom. 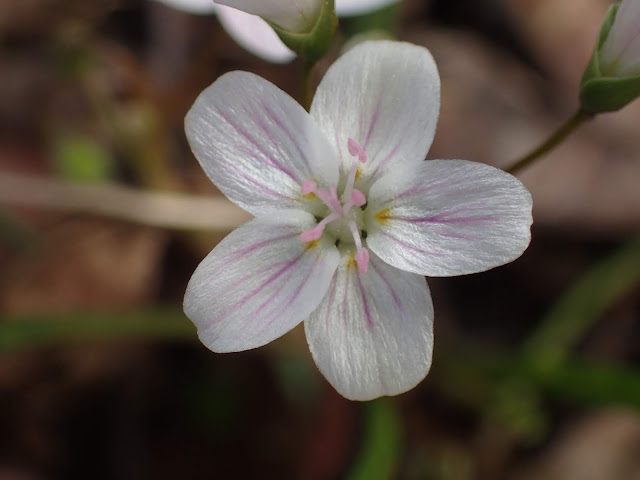 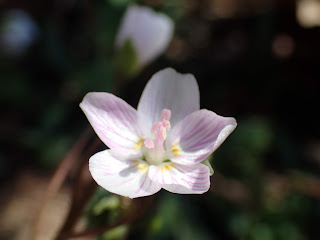 Spring Beauty, Claytonia virginica, is a beautiful little lawn weed. There is quite a bit of diversity with this "species" which is more than likely a complex waiting to be unraveled. Basically it's been noticed that the length, width, and vanes on the leaves vary in populations as well as the flower shape and color... you know all the basic things that define different species.

The population I have going all have narrow grass-like leaves, and white flowers with pink vanes that slowly darken up to magenta as time goes on. And this is fairly typical for this species. There is a form in NJ that has yellow flowers though. 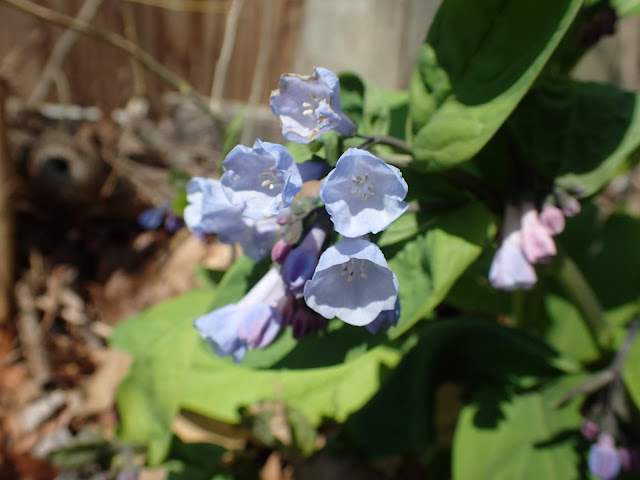 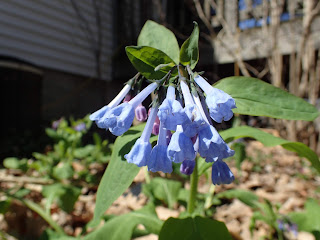 Virginia Bluebells, Mertensia virginica. When I went to the Mt. Cuba Center the first time I heard one of the gardeners complaining about how weedy this plant was and what a pain it is to rip a clump of them out... A few years ago I bought a whole flat of these and put them all over the yard. Thus far they've spread a bit but not to the levels of Goldenrod or Monarda that I was expecting them to be. They don't seem to be reseeding either so hopefully that changes too.

This is another one with lots of mutations in the wild that aren't offered commercially. Some only have pink flowers, only white flowers, some hue purple or various shades of light blue; all of which have been photographed by random hikers on the internet but have yet to fall in the hands of a grower to propagate them for commercial sale. This is partly why I'm hoping my plants reseed and chance upon a prized mutation to disperse to friends or put in the hands of growers. 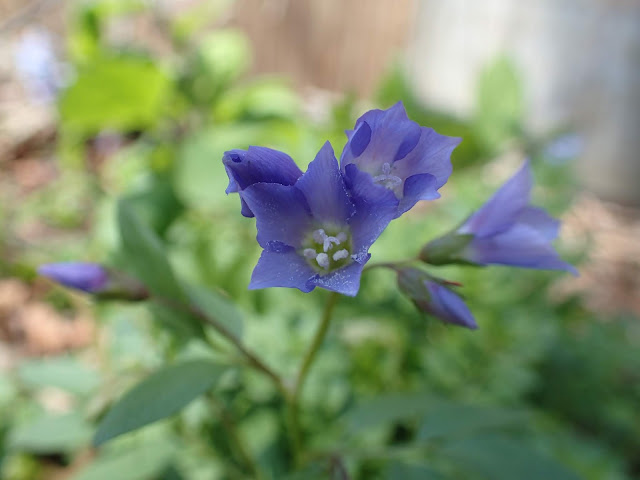 Jacob's Ladder, Polemonium raptans, is a different story. This is one I didn't see to much of at The Mt. Cuba Center so I thought it would be fairly innocent to grow. Well same story, I bought a flat of it and planted it all over the yard. I've found it's a bit more tolerant of dryer sites and does seem to be producing seedlings in these dryer sites. The established plants though are spreading out quite a bit from the tiny plugs they were just two years ago. They're doing wonderful things growing up into nooks of tree roots around the trunk but are quickly going to become a ground cover in a few years if left alone. I'll update and talk about this plant some more in coming weeks.
Posted by MrILoveTheAnts at 6:59 PM
Email ThisBlogThis!Share to TwitterShare to FacebookShare to Pinterest
Labels: Bloodroot, Jacob's Ladder, Spring Beauty, Trout Lily, Twinleaf, Virginia Bluebells
Newer Post Older Post Home