Prenolepis imparis, The Winter Ant, was flying here last week. This was the first main flight for the species in my area. This wasn't as nice a video as it could have been partly because I'm getting over Bronchitis and with the current COVID-19 pandemic going on it's not a good thing to be sick in general. Thankfully the ants were good enough to hold a flight in my yard so I didn't need to venture off to a park to find them. 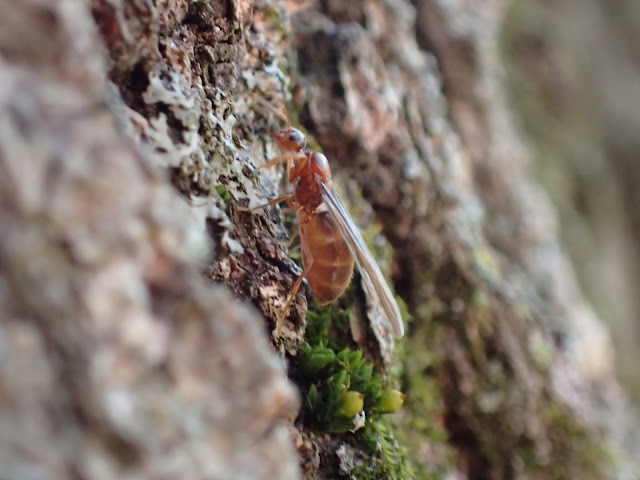 In General, you're looking for a warm day. Queens don't fly unless it's 68F or above out and days when it just hits 68 really aren't good enough. You'll find colonies sending queens up but very few of them are taking off. Days well into the 70's are much much better because as soon as the wind blows or the queens fly off they're not immediately getting chilled.

The next thing to look for are trees, or large wooden structures. The days when this species flies tend to be windy and they need to forage on aphids and scale insects that feed on trees so plants are kind of important with this species. Swarms of males will gather around the trunks of large trees and tall shrubs which is easily seen when looking up towards the sun. Their wings glitter and reflect the sun's rays. I say "wooden structures" because friends in Philadelphia, PA. once reported finding a swarm along a tall wooden fence near one of the many parks they have there in the city. So even in an urban setting you can find this ant.

Once a swarm has been located you want to hang out a few minutes. Males greatly out number the queens of this species a good 200 to 1 or so. Often there will be several trees near one another so spend a few moment casually walking around the trunk to each and repeat. If there's leaf litter by the trees you may want to kick it away as the queens tend to blend in with it almost perfectly. 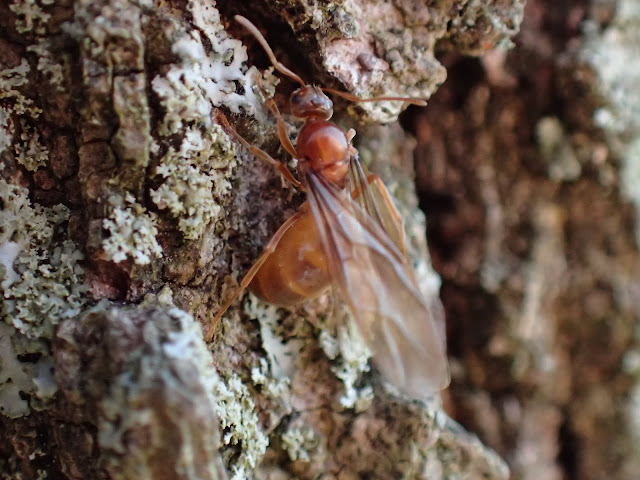 Lastly this is somewhat anecdotal. I've long suspected that males were attracted to the color of the queens along with the pheromones. While recording video and taking pictures I noticed several males land on the monitor to my camera. Further anecdotal evidence, when I was a very young child (not even 10 years old) I had a bright yellow plastic shovel meant for moving sand at the beach. I assume I had used it outside in the winter to play with the snow. And sometime that winter I went out and found it full of male ants. I was too young to say what species it was but I'm pretty sure in guessing they were P. imparis males. It's just one of those things I've been meaning to experiment with.