Ant Genera of North America listed by subfamily. Not all of them have keys yet (made by me). This is a work in progress that will hopefully become a book someday and boy do I have a lot of work to do.

Amblyoponinae - Not Often Encountered! These are long, bullet shaped subterranean predators, with two Very poorly defined waist segments! Along the lower boarder of the clypeus there is a row of teeth. These ants are called Dracula Ants because of their odd feeding habit of non-lethal biting of their own larva to feed. The larva are often placed onto pray items for easy chewing and digestion.
Prionopelta
Stigmatomma (formerly Amblyopone) 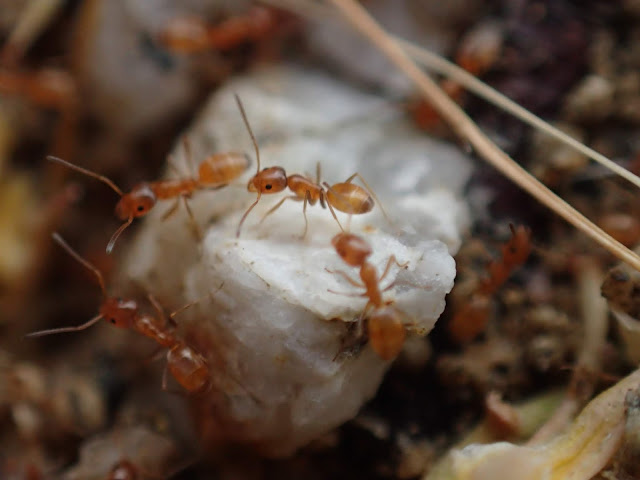 Dolichoderinae - One waist segment, Gaster is more bullet shaped with the tip resembling more of a cigar than a pointed tip. When present, members of this subfamily have more of a "cone" or "tooth" like structure which are webbed between points as opposed to spines which have sharpened tips to them and look more thorn-like. These are all odorous species but often it's used defensively and only release after an individual dies. Other species use these chemicals as ant mace, spraying it in the eyes and antenna of enemies to irritate and harass their foe into submission while tearing them apart.
Dolichoderus
Dorymyrmex (cone ants)
Forelius
Linepithema (argentine and crazy ants)
Liometopum (velvet tree ant)
Ochetellus
Tapinoma
Technomyrmex 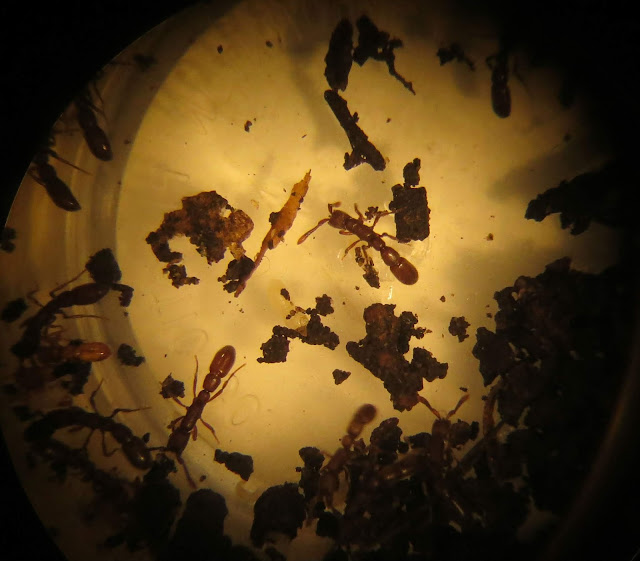 Dorylinae: In North America two subfamilies have been combine because both are considered to be army ants. Ecitoninae and Cerapachyinae. Both have two waist segments and incredibly small eyes except in the males. These are all predators of other ants, focusing mainly on their brood. They almost exclusively live underground and rarely come to the surface. Colonies reproduce by division. Males fly away from the nest to mate with new queens in other colonies. Because of this low reproductive rate, colonies of Army Ants should never be kept in captivity or destroyed in the wild.  Former Ecitoninae members all have thick antenna scapes with curved antenna segments. Former Cerapachyinae have the post petiole connect to the gaster with a wide surface area and Acanthostichus have a series of teeth like structures at the tip of their gaster, and have a 12 segmented antenna. Cerapachys have fully exposed antenna sockets, and an 11 segmented antenna.


Ectatomminae - Two waist segments, however the second connects to the gaster with a large enough surface area to be easily confused as part of the gaster. Body texture of the head and mesosoma are always covered in well defined groves and or craters.
Gnamptogenys 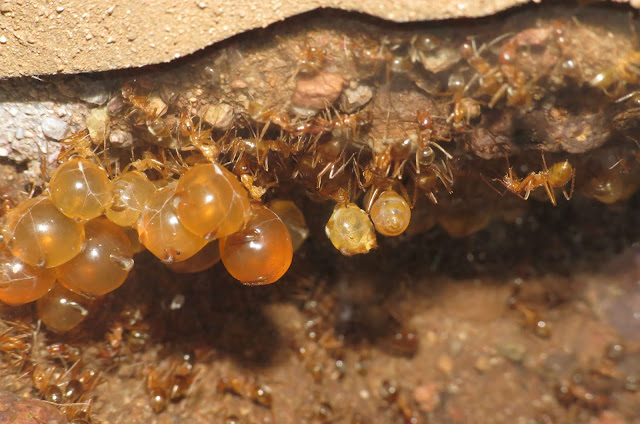 Formicinae - One waist segment, Gaster is pointed at end with tuft hairs used to spray formic acid. Having spines in this subfamily is not unheard but they are not common in North American species. Acid spraying is often a secondary action to bitting, and, over all, is only used as a projectile weapon in some Formica species. Note: Formic acid smells awful, can cause skin irritation and even blindness if sprayed in the eyes. Some members of the Lasius genus are the exception to this subfamily as they also produce a citronella odor when disturbed.
Acropyga (root aphid ants)
Anoplolepis
Brachymyrmex (rover ants)
Camponotus  (carpenter ants)
Colobopsis (door ants)
Formica (field, wood, and thatch ants)
Lasius (garden and citronella ants)
Lepisiota
Myrmecocystus (honeypot ants)
Nylanderia
Paratrechina (crazy ants)
Plagiolepis
Polyergus (slave making ants)
Prenolepis (winter ants) 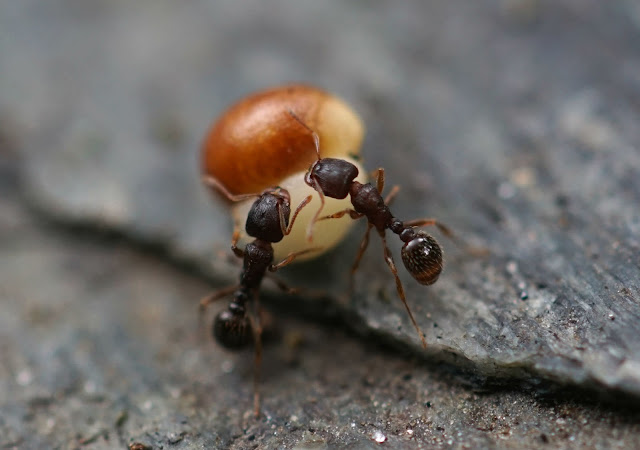 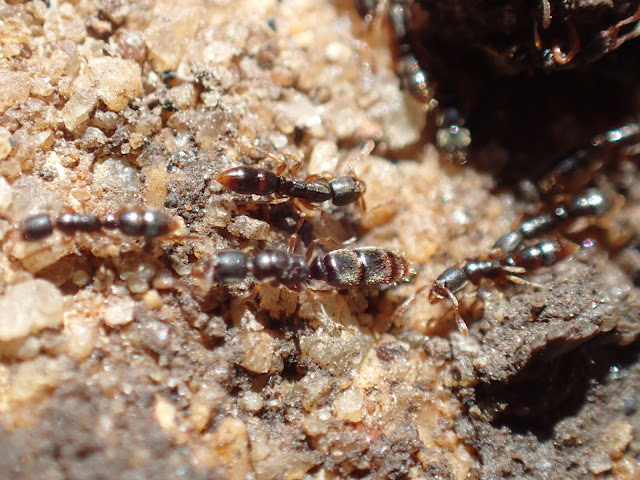 Ponerinae - Two waist segments, however the second connects to the gaster with a large enough surface area to be easily confused as part of the gaster. These tend to be more the commonly encountered species with this trait.
Anochetus (trap-jaw ants)
Cryptopone
Hypoponera
Leptogenys
Odontomachus (trap-jaw ants)
Pachycondyla (needle ant) (Brachyponera)
Platythyrea
Ponera 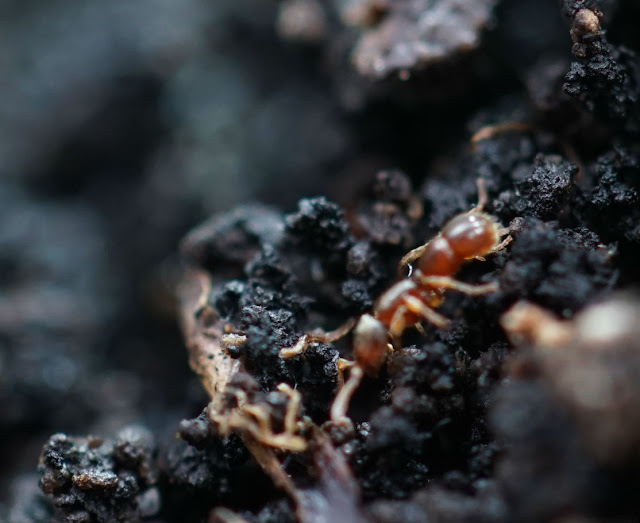 Proceratiinae - Tip of the gaster curves around to either face down or forward towards the head. This makes hunting pray items in leaf litter, underground, and within decaying wood easier to sting in tight spaces.
Discothyrea
Proceratium

Pseudomyrmecinae - Two waist segments, Eyes are enormous in comparison to the head. Pronotum and Mesosotum are two separate and flexible segments. Often the body shape is thin and elegant. These ants are typically fast moving and associated with certain trees.
Pseudomyrmex
Email ThisBlogThis!Share to TwitterShare to FacebookShare to Pinterest
Home
Subscribe to: Posts (Atom)