One of my favorite ant species to photograph are Prenolepis imparis, the Winter Ant. Their queens are beautifully colored, they fly early in the year along side a lot of our earliest native wildflower and sometimes the two "blooms" line up. That's not the case here, but I'm glad to say I didn't have to stage this photo; I walked out in my garden one day and saw it happening. 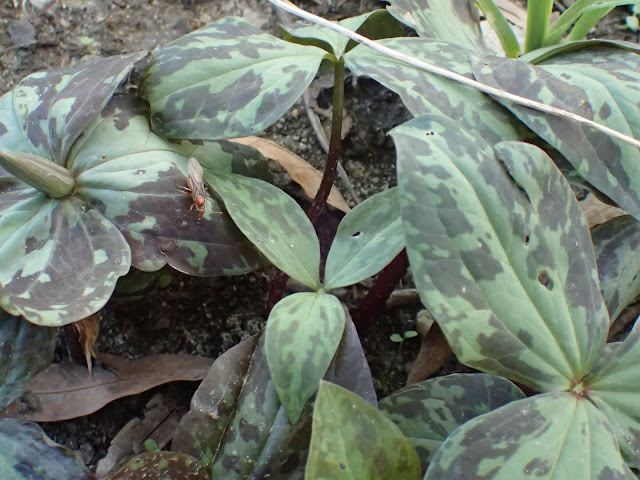 This is a patch of Trilliums in the garden that mostly divided this year. It's fairly shady and just under our deck. And it was fairly cold in that spot as opposed to locations in the sun. 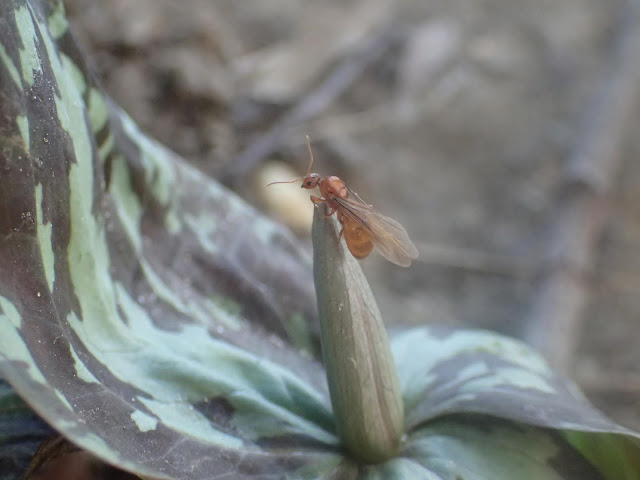 One of the main factors I look for when going out to spot P. imparis queens is a day with temperatures above 68 degrees Fahrenheit. That is the bare minimum temperature queens of this species need in order to leave the nest. One degree lower and they won't take off, though you may see one or two who have been warmed by the sun taking flight. 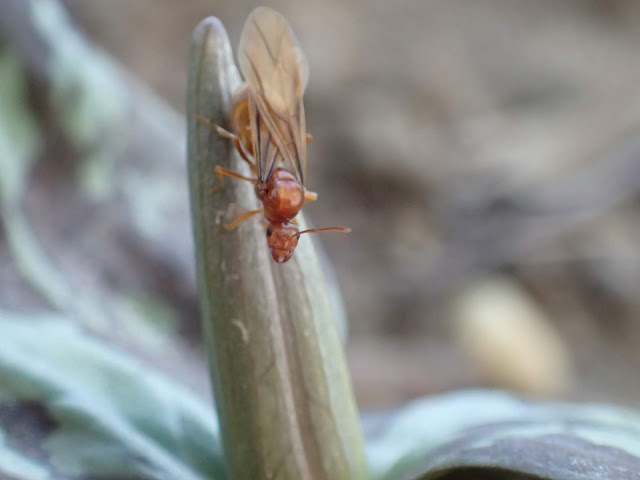 I'm at a point in my obsessive plant habit where I have Trilliums now dividing into large clumps and spreading a lot by seed. Lots of other plants too are filling in in places around the garden so chances like this are becoming more common without me having to stage them. 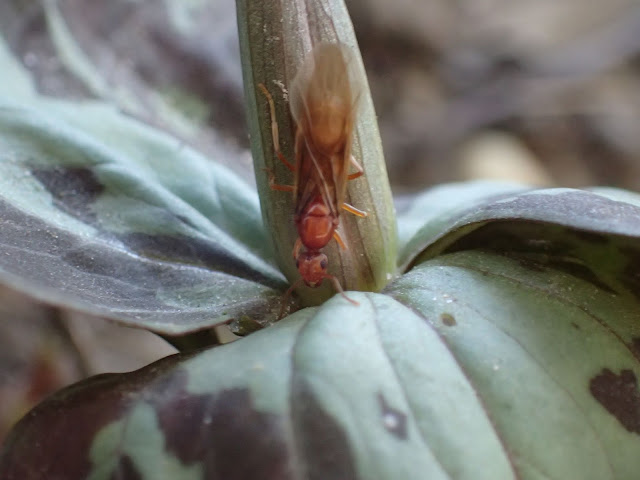 And because it's in my yard I don't have to venture far to find it... though this image isn't a good example of that. She's just moved onto a stick that pushed up one of the Trillium leaves. 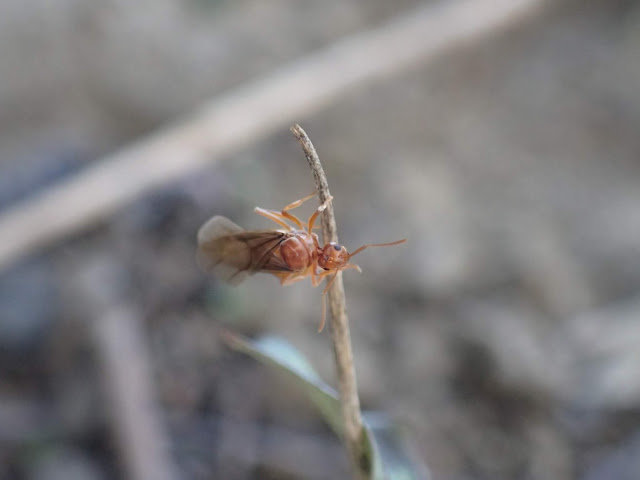 While it's great that this happened by chance, it wasn't the best location to have happened. The low lighting meant I should have been using a different camera with a flash on it. I took about 70 photos and only the 7 here were really worth showing. They're nice photos but not the best I've taken of the species. 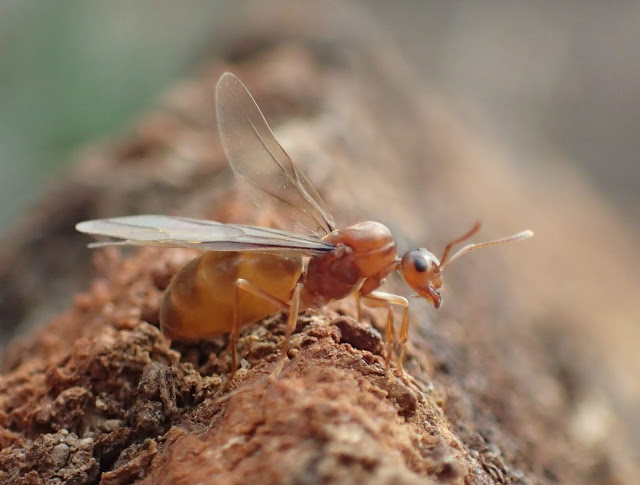 Here's a shot from last year for example, in a different location with better natural lighting and with the same camera. 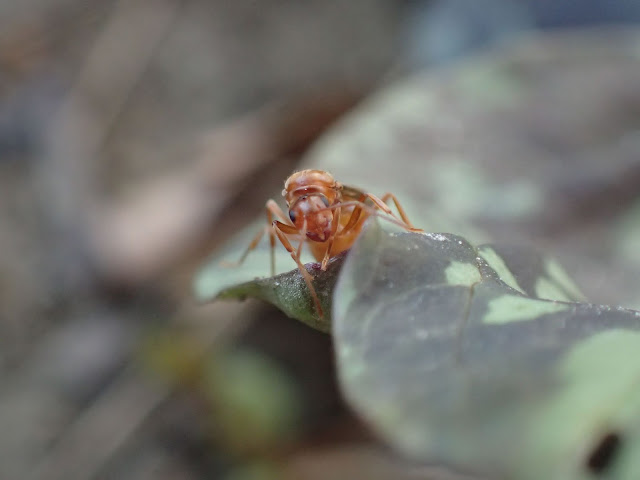 The queen was sort of cooperating because it was too cold for her to take off. The whole time I'm taking images though I was thinking, 'Man wouldn't this be better if she was on a flower that was open.' 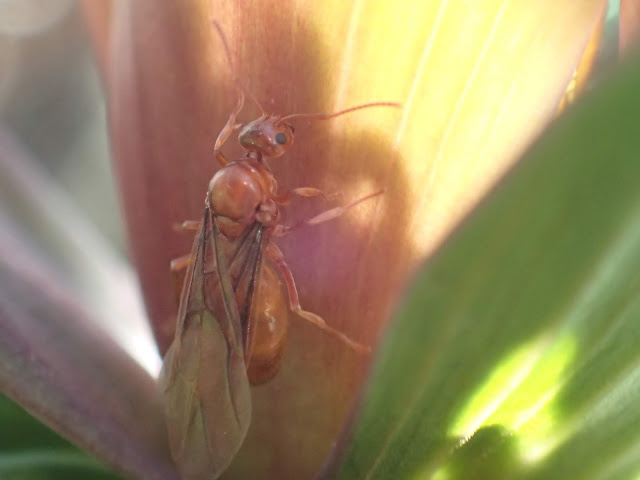 I did soon after took her to a Trillium sessile that was blooming (and smelled amazing!) but the added sunlight was enough to warm her and she took off shortly after this photo was taken.
Posted by MrILoveTheAnts at 11:54 PM
Email ThisBlogThis!Share to TwitterShare to FacebookShare to Pinterest
Labels: Prenolepis imapris, Trillium, Winter Ant
Newer Post Older Post Home