I'm finally getting a bumper crop of Monarchs this year. Despite growing several species of milkweed they don't always seem to find my garden every year. When I speak with friends out in Missouri and Illinois they're surprised that I don't really see Monarchs here in New Jersey until August. On some years if I drive out and about I do see the occasional Monarch in June but usually not in my county. It's as if the females don't want to waste their time with anything less than a huge field of common milkweed.

Geographically speaking I also feel they don't fly through my area until they're migrating south again. I live in Camden County, New Jersey which is on the Delaware River side of the state, but we're somewhat inland. I suspect as they're flying north they're reluctant to cross the river and on the occasion that they do, they're more inclined to visit open fields as opposed to suburban gardens.

As the summer presses on the populations that were established extend outward as patches of milkweed are devoured. Then heading as they all start heading south a wave of Monarchs in the New England area all follow the coast line. Cape May, NJ. is a fantastic spot to see them passing through. A few years back I was there and saw they'd planted a huge stand of Sea Side Goldenrod, Solidago sempervirens, which was in spectacular bloom when I visited but is likely now all died out.

Sea Side Goldenrod is a fantastic plant that can take a beating. It's able to grow in 100% sand at the beach! I don't think it survives the tide coming in but it can take high levels of salt. Thing is, it also grows a lot better in clay soil and garden soil too. And I find it's that way with a lot of plants that are supposedly tough to kill, hardy, drought tolerant. 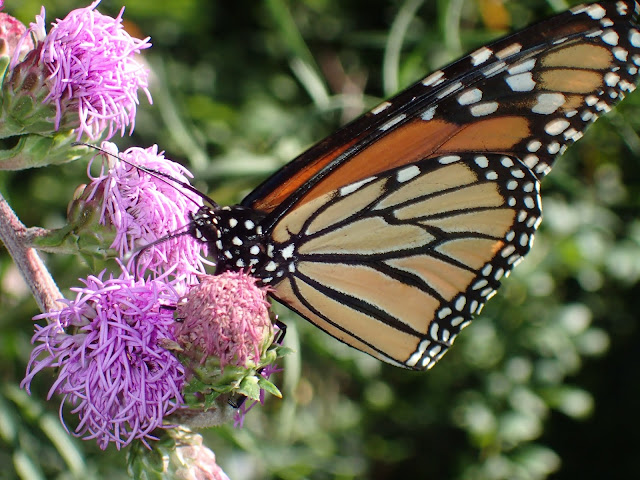 One key plant I feel that helps draw in the Monarchs is Meadow Liatris, Liatris ligulistylus. Tragically this is a biannual that doesn't reseed well in my garden. I have several of these though in a pot that came back from last year so maybe that's the key. They were part of a flat of 50 plants and all the ones I placed into the ground died! 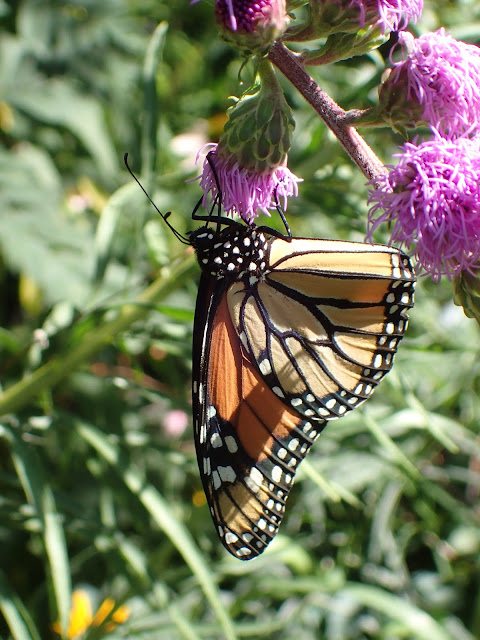 This is easily their favorite nectar plant until it finally stops blooming. There's always at least one or two out there fighting over it. 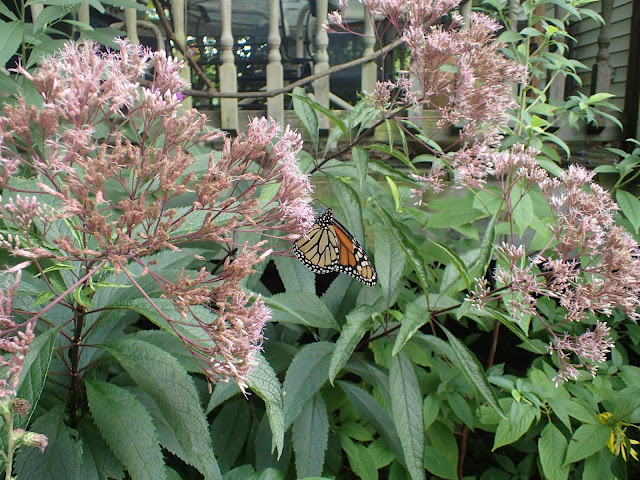 Joe Pye Weed is another native though certainly not high on the list. At last not in my garden. The plants at the Mt. Cuba Center got more attention than mine but they don't have any Meadow Liatris around. 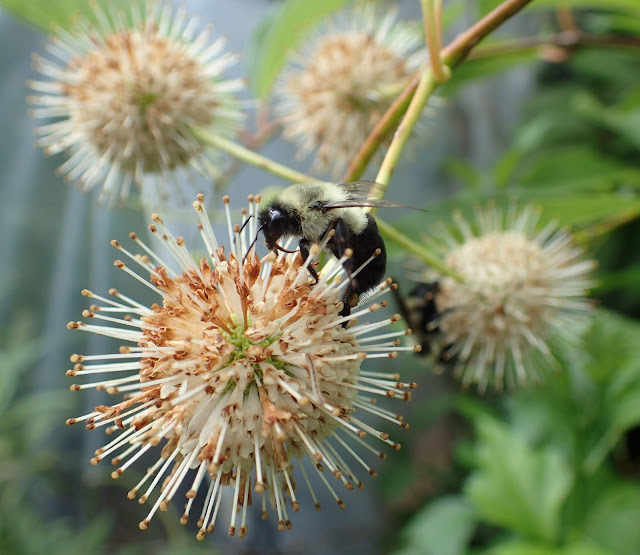 Buttonbush, Cephalanthus occidentalis, might as well be marketed as White Butterfly Bush. For years I've thought this was one of the best nectarine plants North America had to offer. There really isn't a kind of bee or butterfly I haven't seen on it. And for years I thought what a shame it only blooms for a week or two... but this year something neat happened with one of my plants. Mysteriously it leafed out in an odd pattern with the lower branches becoming fully green before the ones higher up and then also produced newer branches up at the top. The result was that these locations all produced flower buds a week apart from one another and then bloomed first on the old growth and worked it way up to the new. So this year I got about three weeks of flowering out of it. Apparently older shrubs do this, which makes me glad I planted 2 more around the house. 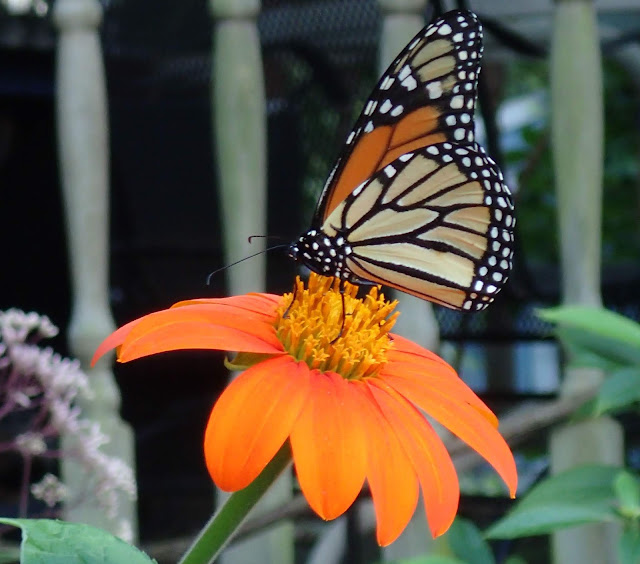 Besides the Liatris I'd say the Mexican Sunflowers is the Monarch's second favorite nectar plant. And once the Liatris finished flowering they were all over these in my yard, favoring them over the Joe Pye Weed, Buttonbush, Phlox and Ironweed. They still visited all of these plants but I could always guarantee to find a Monarch on the Mexican Sunflowers whereas sometimes I'd walk my garden and rarely see them on any of the others. 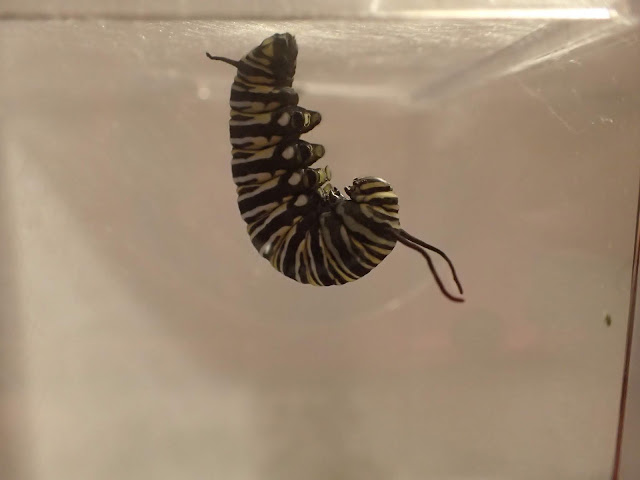 Common Milkweed was the host plant of choice. I grow Swamp Milkweed, Butterfly Weed, Purple Milkweed, and Sullivan's Milkweed too and haven't found a Monarch on any of them.

Actually I worry about the Butterfly Weed I bought from Home Depot. I found eggs on the leaves but not one caterpillar!!! When I bring in sprigs of this plant to feed to caterpillars I have in small plastic cages they refuse to eat it. I don't know if it's just because it's a different kind of milkweed than they're used to eating or because they're spraying them with a systemic pesticide and the caterpillars are somehow picking up on that. Either way I'd love to know just to put my mind at ease, cause it's an awful shame if Home Depot was selling whole racks of tables full of 3 gallon sized pots of beautiful orange Butterfly Weed that was coated in poison. 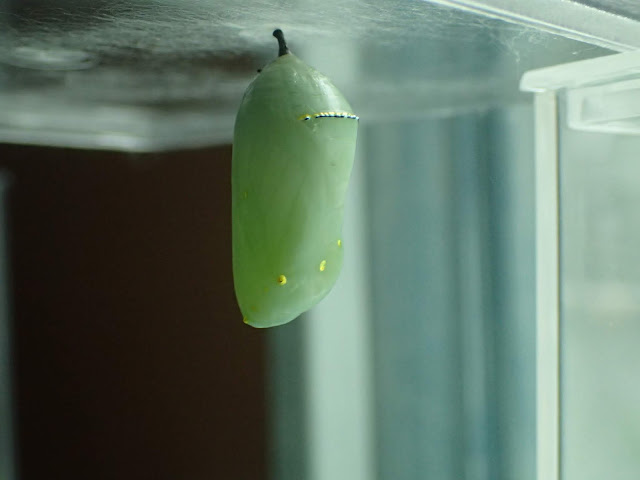 Any who, all the eggs and small caterpillars I've been finding on Common Milkweed I've been bring inside and letting them develop that way. The plants outside have holes in the leaves indicating that young caterpillars had tried to eat the leaves but were nowhere to be found. Naturally as ant friendly as my yard is the plants are crawling with them which are likely responsible for these missing caterpillars. 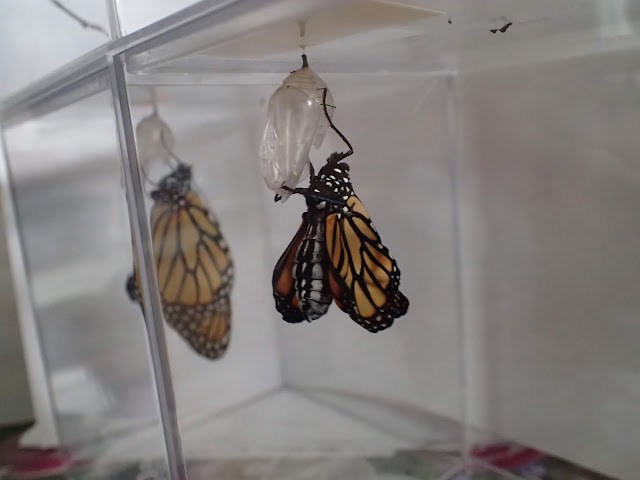 ~9 to 14 days later a batch of Monarchs are born. Everywhere online says 10 to 14 days, but I think this is 10 days starting from when they hang upside down and make a J shape as seen 3 photos up. 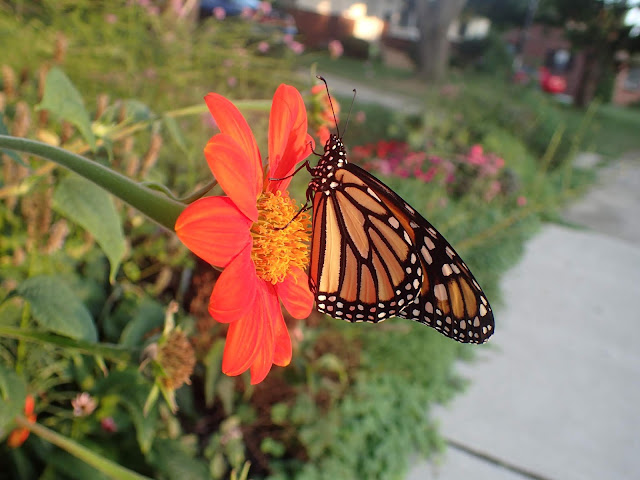 And from here I let them go. 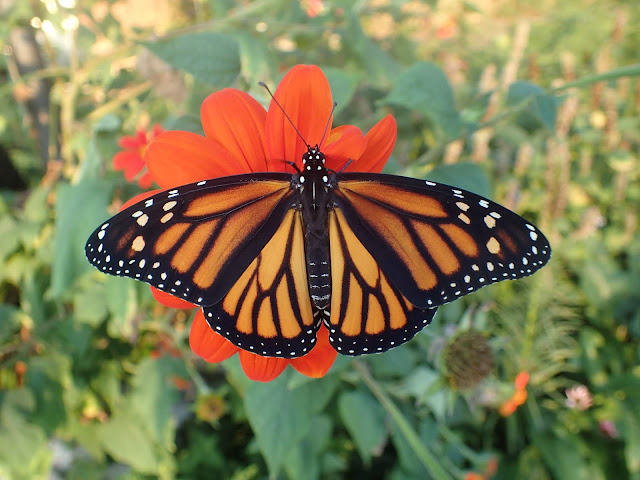 As a bit of controversy I posted these images on facebook and a friend on there commented. "Wouldn’t think you’d be into this." Which I mistook to mean he thought it was odd a grown man would be into raising butterflies. I replied that I was a native plant gardener so why wouldn't I be into this? And then he made his point clear.

Basically he thought it was unnatural of me to bring the caterpillars inside and nurture them into adulthood. In his view I should have left them outside on the plants to be eaten by birds, ants, and spiders so that nature can take its course. Which I admit he has a point but he also implied that because I had helped a few caterpillars along I was actually doing a disservice to them. Somehow in his view because I had increased the population of the Monarch Butterfly by 5 I had in fact decreased it....

This argument bewildered me as it's the first time I've ever heard it. In fact the internet is filled with hundreds of How To Raise Monarch Butterfly websites. The only thing close to what this person is saying on any of them is to keep an eye out for certain diseases, though all the ones that I know of for Monarch Butterflies either terminate them in development or leave their wings so deformed that euthanizing them is really the only option.

I could make further arguments toward this person as it's sort of similar to the anti-vaccination movement that's bringing back diseases long thought rare and uncommon. Shouldn't we let nature take it's course?

I didn't make this exact argument to the person as it's the kind of thing that would have made me unfriend them. I did put it another way. Basically I asked shouldn't I have not gone out of my way to plant Milkweed in the first place? Shouldn't I have just let whatever weeds decide to show up there grow be thankful nature took its course.

Oddly enough this individual changed his line of thinking when it came to plants. He told me plants are different... and then he said something about meadows and gardens that didn't really make senses. This annoyed me because, plants are not different, they pollinate, and reproduce, and if one were to help the seeds along by putting them in the ground, watering and feeding them, how is that any different from me bringing in some milkweed leaves with eggs on them, putting them in containers and letting the resulting caterpillars develop into adulthood?

Has anyone else come across the Let Nature Be types out there?

UPDATE: Apparently there are people who raise 100+ Monarchs (and likely other butterflies) indoors all year.... I'm not doing that!
Posted by MrILoveTheAnts at 1:45 AM
Email ThisBlogThis!Share to TwitterShare to FacebookShare to Pinterest
Labels: Butterflies, Chrysalis, Monarch
Newer Post Older Post Home